The clients wanted to remodel the kitchen of the Gresham home they had lived in for over 30 years.

“They wanted to open the kitchen up to the dining room and include some of the architectural elements of the existing space, such as the arch that formed the entryway,” said Neil Kelly Design Consultant Chad Ruhoff.

The house was originally a carriage house built in the late 1800s and had been remodeled several times. The home was built on a slab, but had framing over the slab to support the floor system making access difficult. The wiring, framing and plumbing were all unpredictable and unknown without doing some demolition.

“The angles in the area where the kitchen was were not something you would expect — like the original builders or remodelers were not working off a plan,” Ruhoff said. 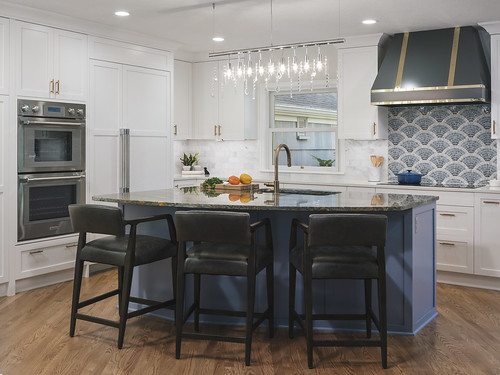 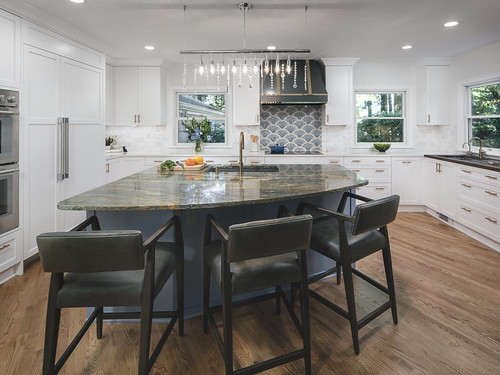 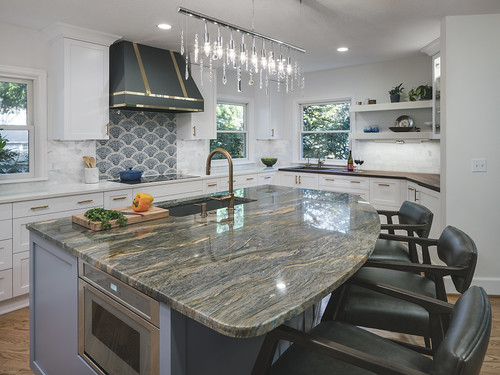 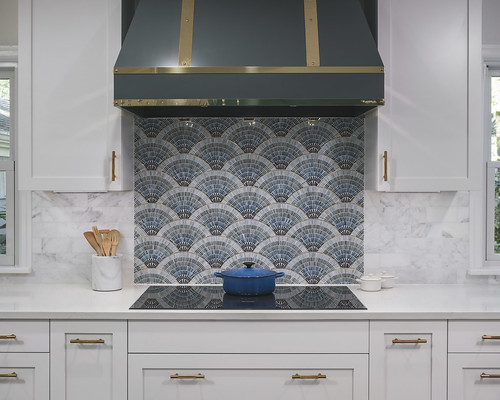 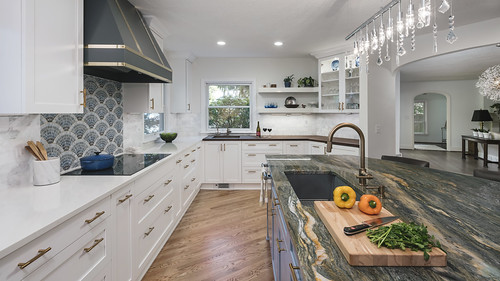 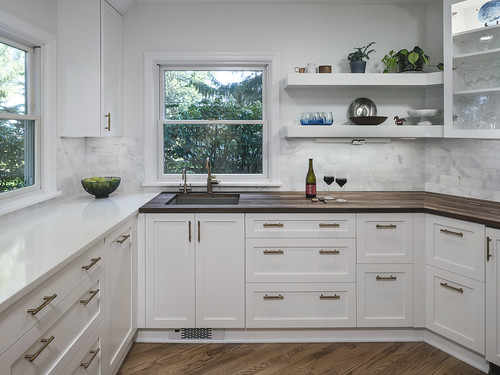 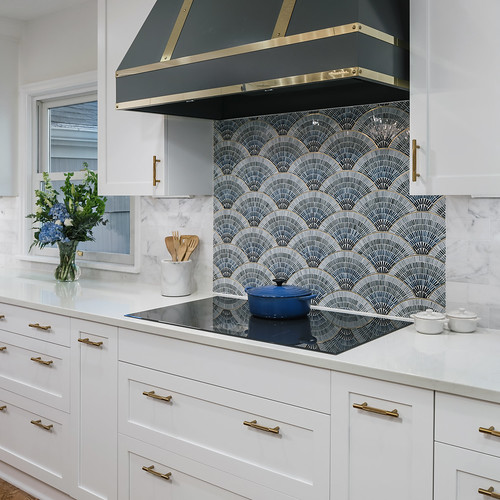 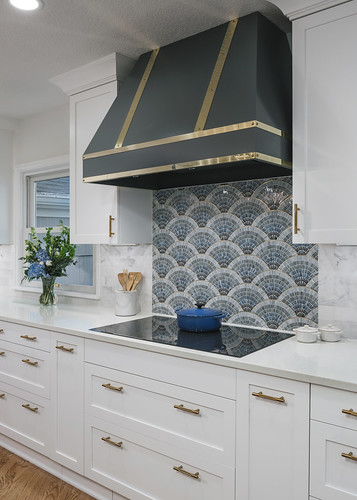 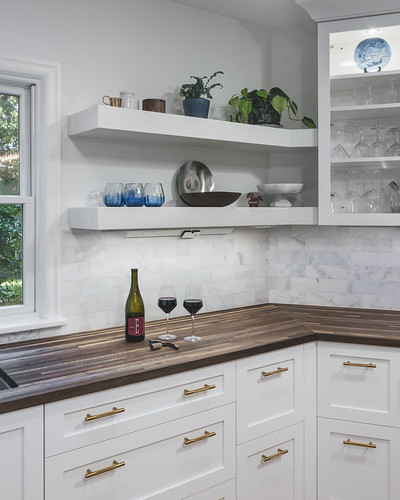 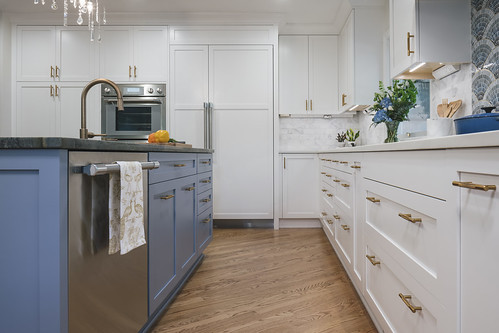 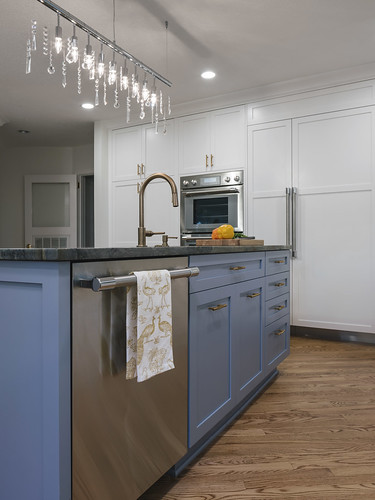 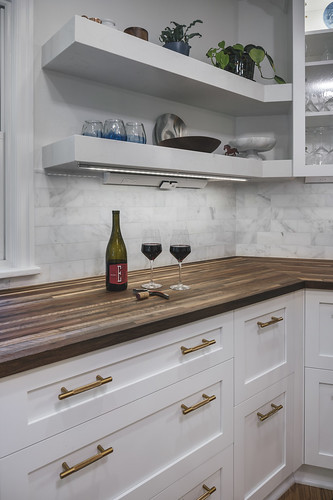 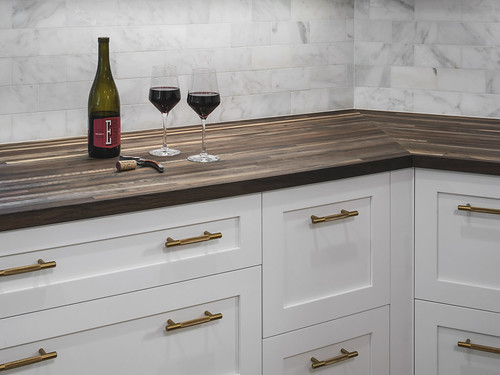 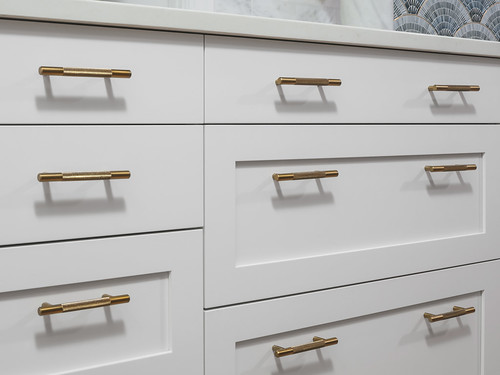 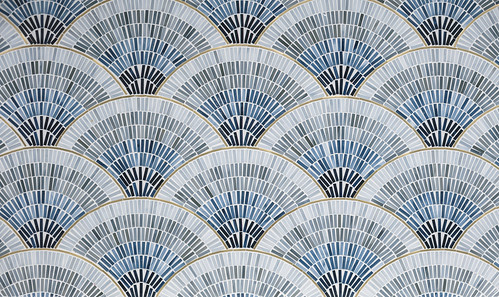 I think my favorite part of this project was seeing the excitement in my clients eyes when the design all came together as they had imagined. – Chad Ruhoff

The homeowners had a design taste that was both elegant and refined while also being casual and welcoming.

“As a designer, it was fun to show them sample materials and see them light up with excitement,” Ruhoff said.

Ruhoff’s design team was able to take advantage of odd angles in the existing kitchen space. They opened up the kitchen to the dining room, and visitors can now see the elegance of the kitchen island quartzite slab and the knurled brass hardware on the stately white cabinetry as they enter from the dining room.

But hidden gems are just out of site. In the kitchen visitors will also see a beautiful walnut countertop beverage bar around one of the unusual angles preserved from previous construction. Floating over the beverage bar, as if tempting fate, are two angled 3” thick quartz shelves.

“There is lots to love about this kitchen, from the beauty of the gunmetal and brass range hood to the whimsical crystal island pendant light,” said Ruhoff. “But I think my favorite part of this project was seeing the excitement in my clients eyes when the design all came together as they had imagined.”

Ready to turn your dream home into a reality? Connect with Neil Kelly today.