When homeowners John and Rebekah moved to Eugene, they wanted to find a mature home in an established neighborhood that they could put their signature on. They found a 1951 Ranch style home in a South Eugene neighborhood that had been well loved by its previous owner.

However, on the inside, the kitchen suffered from a remodel that was done in the mid-1980s.  It was worn, dark, and dated — not a fun or easy place to entertain. The 80s-era remodel didn’t really improve the functionality of the space and didn’t fit the style of the home.

As fans of Mid Century architectural style, the homeowners wanted to restore the original look of the kitchen and enhance what was already there without building outside of the existing footprint. They also wanted to re-use as much as possible, and select products and materials that would be sustainable. 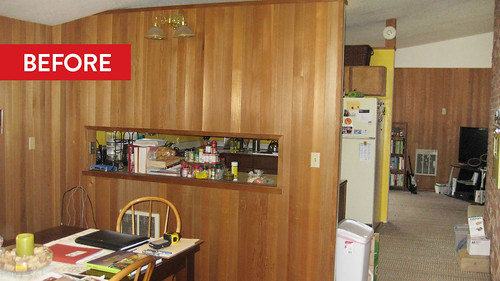 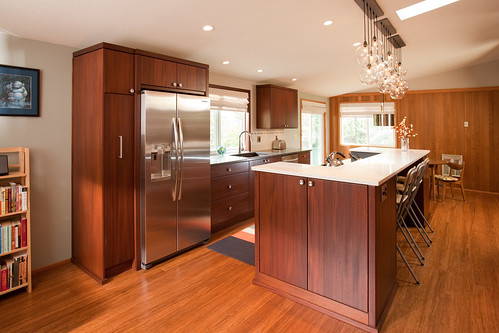 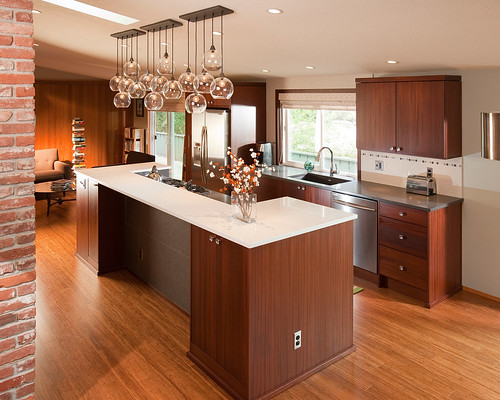 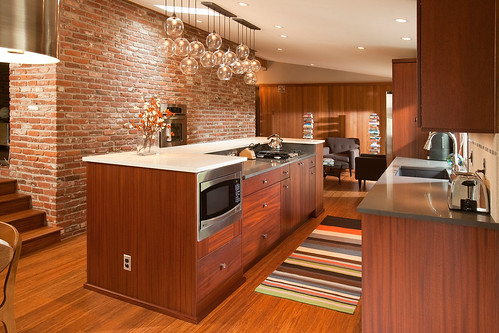 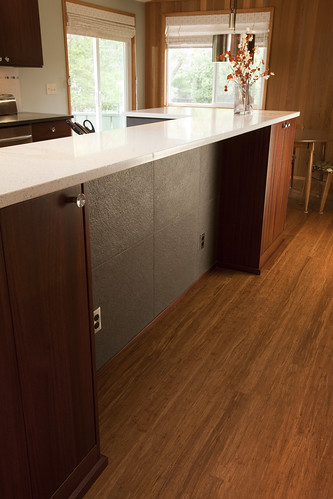 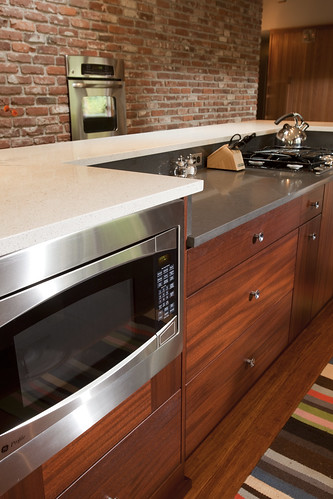 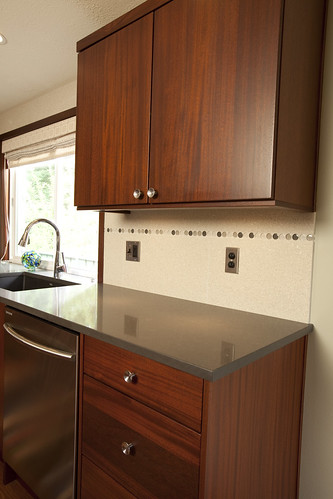 “Our goal was to create an open kitchen that was functional and entertaining and easily flowed into the dining and family room.” – Matt White

That’s when they brought in Neil Kelly Design Consultant Matt White and his Eugene design team.

“The existing home had an open, airy, split-level feel with a strong brick element dividing the upper level from the lower level,” White said, “but the kitchen was closed off from the adjacent spaces. Our clients wanted an open feel, but they worried they would lose too much countertop and cabinet space compared to the existing kitchen. Our goal was to create an open kitchen that was functional and entertaining and easily flowed into the dining and family room on either side.”

White’s team soon realized that removing a partition wall and working within the existing framework would limit the space available for the new kitchen. So the island became the focus of the design. It provided the main food prep and cooking area, and helped direct traffic through the space, keeping guests comfortable on one side and cooks on the other.

Elsewhere in the kitchen, quality appliances were re-used. The oven was located in its original brick wall location. The microwave convection oven was located neatly under the island countertop. Large porcelain tiles clad the back side of the island to protect the surface from feet on stools and accent the surrounding surfaces. A tall pull out pantry was included to the left of the refrigerator.

Modern materials were chosen to fit the existing style of the home. Mahogany cabinets topped with Caesarstone countertops in Nougat and Raven were accented by 24×24-inch recycled porcelain tile with 1-inch glass penny round decos. 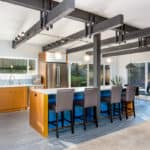 Light fixtures and cabinet hardware helped to evoke Mid-Century style in the design. Much of the lighting was transformed into high efficiency low voltage.

Adding a glass sliding patio door on the dining side created more access to the back deck and brought more light into the room. A single skylight was added between the island and the large brick wall in the center of the home. The kitchen window was enlarged as well.

“Matt listened to our abstract ideas and successfully transformed them into exactly what we wanted,” John said after the kitchen was finished. “The Neil Kelly staff made the entire remodeling process so smooth that — aside from having microwave dinners for several weeks — we hardly noticed a thing. We’ve always loved our house, but now we really can’t imagine ever leaving it.”

Are you ready to remodel – or build – your dream home? Talk with us. Neil Kelly can help bring your vision to life. 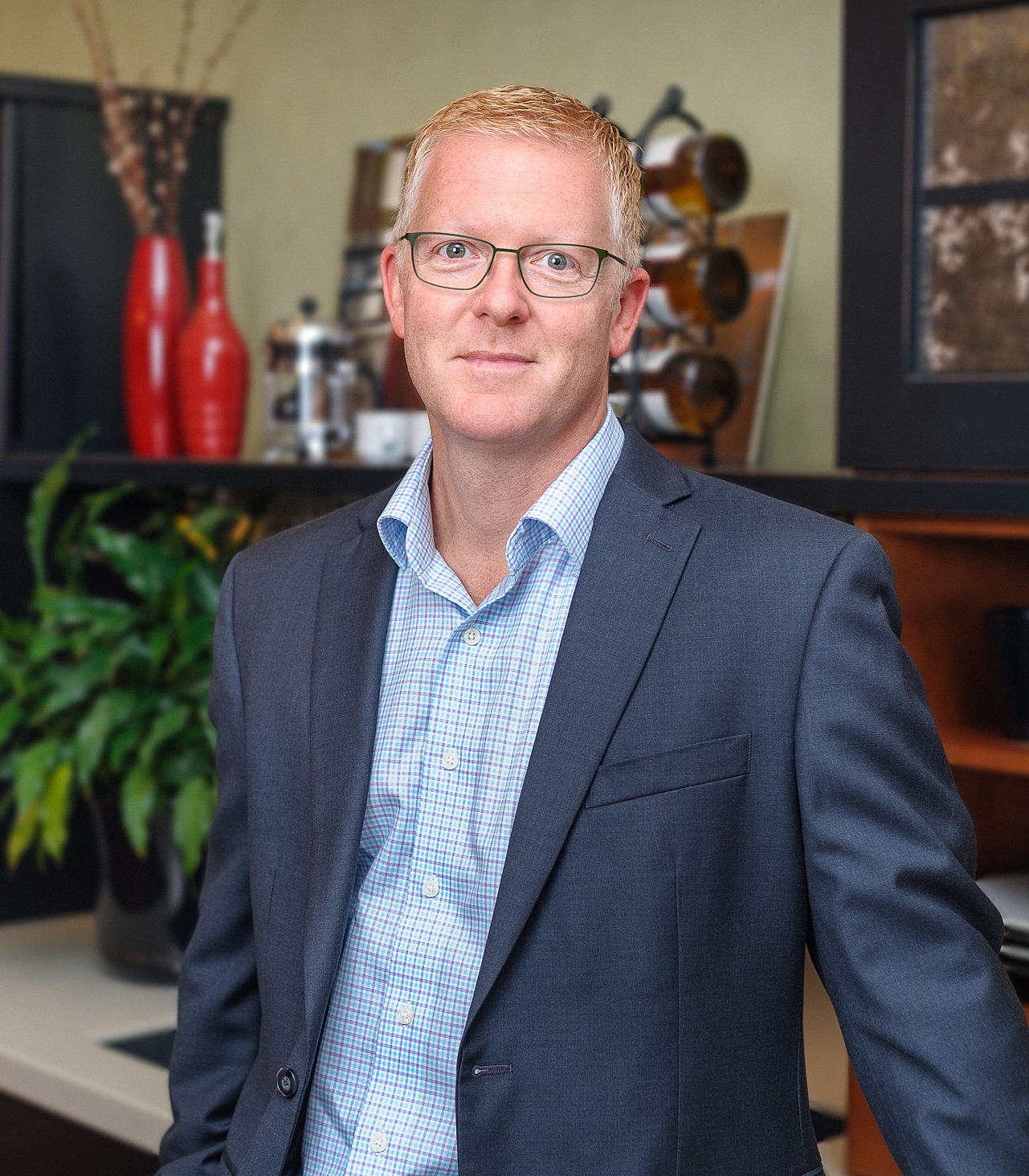 With a background in architectural design and construction, it’s no wonder Matt White’s comfortable wearing a few hats at Neil Kelly: General Manager of our Eugene location, as well as Design Consultant. His remodeling designs span residential and construction projects. Matt’s sense of design, remodeling experience, and eye for details serve his clients well, and form a solid team leadership foundation. Known for his innovative ideas, Matt inspires his Neil Kelly teams on projects ranging from kitchens to whole house remodels. Besides winning national awards, Matt’s work has been featured in the Register Guard, the Oregonian, Eugene Magazine, Portrait of Portland, and Oregon Home magazine.