The term “man cave” is admittedly outdated. It infers that, as a man, the only part of a home you have the right to decorate is a dark cave or attic crawl space. Nowadays, a man cave is designed by anyone, regardless of sex or gender, and has evolved into the entertainment capital of a home.

But let’s face it, the words “man cave” just sound kind of cool.

What Is A Man Cave? 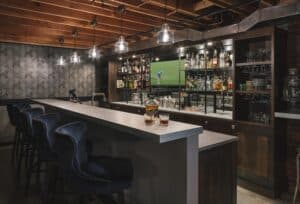 Traditionally, man caves were the one part of a house where a man could decorate with bar swag, sports memorabilia, and a TV so large it could cook a turkey from eight feet away. But now, man caves are often shared by all members of the household and some are downright sleek.

“In the man cave, you’ll find blasts from the past, keepsakes from the Glory Days (either his or someone else’s), and sports memorabilia from the mundane (a baseball) to a fingernail clipping from a Super Bowl Champion,” says Neil Kelly Design Consultant David Ewing.

As they evolve from their gender-specific title, man caves are also becoming more high-tech entertainment spaces. “We’ve got to have music covered,” says Ewing. “And there are so many ways to do this, all of which has to be driven by a heart-pounding, clean-as-a-bell listening inner-ear experience.”

However, a stereo would be worthless without an anchor. For most man caves, that anchor is a television. A man cave wouldn’t be complete without a large TV suited for sports, shows, and movies. Luckily, big doesn’t have to mean intrusive. LED technology allows flat screen TVs to be slim—and as far as energy consumption goes—trim.

Last but not least, embrace color as a way to bring warmth to the room. “Whether it is the colors of their favorite college, or some gnarly neon,” Ewing says, “color adds personality.” 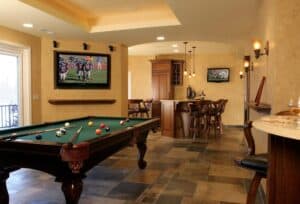 Remodeling your basement into a man caves is a great opportunity to upgrade the space so it can also double as a wine cellar. And, in some cases, if wine is what moves you, you can make the entire space a salute to Sauvignon. Whether you have a daylight basement or a more traditional option, finding the right lighting and decor can turn a bland basement into a swanky Mad Men experience.

Another common place to create a man cave, whether it’s for a fitness or entertainment space, is the garage. Using a garage’s separation from the home is a creative way for the man cave to be less obtrusive if the interior decor is not consistent with what’s throughout the house. This is another way to use space and storage that might otherwise be wasted. Combining aesthetics with function, a garage conversion can be a great place for the whole family to relax, have fun, and bond.

Here are some of the most desired features of home entertainment spaces for your large or small man cave: 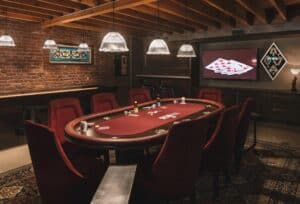 Have a theme: Are you a soccer fan? Do you love Star Wars? Are you into casino games? Designing your man cave space around a specific theme or activity can give you a way to express yourself — and give your guests a fun place to visit.

Do you dream of having a party room or entertainment space that impresses your guests? The award-winning designers at Neil Kelly have the expertise to make your dreams a reality. Get in touch with us today!